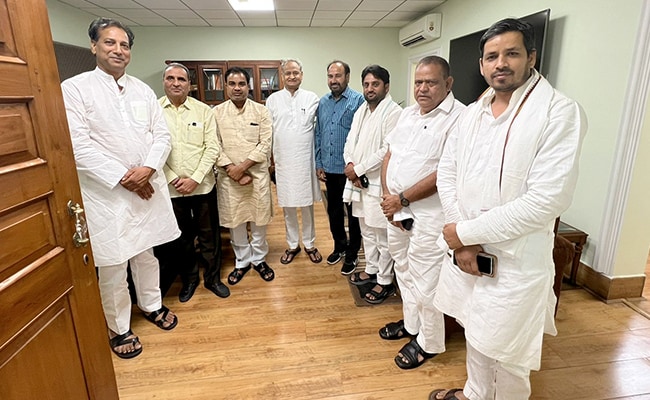 The Rajasthan BJP has asked its MLAs to report to the party office in Jaipur, from where they would be taken to a resort outside the state capital, sources have said. The BJP’s decision to keep its flock huddled into a resort comes after a similar move by the Congress ahead of the Rajya Sabha elections on June 10 over poaching fears.

The BJP has told its MLAs it is taking them for a “training programme” to the resort, sources have told NDTV.

BJP leaders Narendra Singh Tomar and Arun Singh are in Jaipur to oversee the party’s battle formation for the Rajya Sabha elections.

The Congress has managed to get former Bahujan Samaj Party, or BSP, MLAs together. Of the six BSP MLAs who had merged with the Congress, taking the party’s strength to 108, four had decided not to join the resort in Udaipur where Congress MLAs are kept. Later, after a meeting with Chief Minister Ashok Gehlot, the four agreed to come on board.

“We are together. We will stay together. When the government was in a crisis, these people saved us and stood by us, so what is a Rajya Sabha election? Every MLA has their problems, we are addressing all concerns,” Mr Gehlot said.

The entry of BJP-backed media baron and Essel Group boss, Subhash Chandra, as an independent candidate for the Rajya Sabha from Rajasthan, has made matters complicated for the Congress as Mr Chandra’s candidature has created a contest on Rajasthan’s fourth Rajya Sabha seat.

After voting for two candidates, the Congress needs 15 more votes to elect the third candidate. The BJP can elect one candidate, and it needs 11 votes for the second.

The Congress has fielded Mukul Wasnik, Randeep Singh Surjewala and Pramod Tiwari from Rajasthan. But Mr Chandra is the fifth candidate for four Rajya Sabha seats from Rajasthan. The BJP’s own candidate is Ghanshyam Tiwari.

Mr Chandra’s entry means the fourth Rajya Sabha seat will now be a contest, when the Congress was hoping for a smooth sailing.

In the 200-member Rajasthan assembly, the Congress has 108 MLAs. Each Rajya Sabha candidate needs 41 votes to win. The Congress can easily elect 2 candidates, but then will be left with 26 votes and need 15 more to elect their third candidate.

The BJP has 71 MLAs, and after electing one candidate, it has 30 votes to spare but needs 11 more to send Mr Chandra to Rajya Sabha.