CRISPR a tool to edit glitches in genes

Hyderabad: In the last few years, the gene-editing tool CRISPR (Clustered Regularly Interspaced Short Palindromic Repeats) has quickly emerged as a powerful technique that has the potential to end many diseases in the coming decades and even have a profound impact on the evolution of the human race.

Through CRISPR, geneticists can alter the human DNA sequence and modify gene function. As a result, CRISPR has spawned numerous research studies aimed at developing therapeutic applications and finding permanent solutions for diseases that have troubled us for decades.

In the coming years, CRISPR could well provide highly personalised therapeutics for individuals for many diseases like cancer, sickle cell anemia, diabetes, HIV, high cholesterol, and even muscular dystrophy.

Just like how silicon, which is now an integral part of all electronic devices including computers, revolutionised the IT sector, it is being increasingly believed that CRISPR too can play a similar role in medicine and the development of human genetics.

While there is so much promise, there are ethical questions too, as geneticists through CRISPR can manipulate or edit the human genome at the embryo level. Such research can give rise to ‘CRISPR babies’ who are gifted by birth and have the ability to have resistance to diseases. While such traits are advantageous, there are still difficulties in understanding the side effects related to CRISPR.

What are CRISPR babies?

In 2018, the entire medical world was stunned by revelations made by He Jiankui, the Chinese biophysicist from Shenzhen, who announced that along with his team, he had created the world’s first gene-edited babies who were less susceptible or were resistant to HIV.

The Chinese team utilised the gene-editing system to edit DNA in human embryos to make them less susceptible to HIV. The edits were designed to disrupt a gene that codes for a protein that allows HIV to enter immune cells.

The study by Chinese researchers raised a lot of legal and ethical questions. The CRISPR technology theoretically has the potential to develop super-humans who are not susceptible to diseases that have traditionally challenged the public healthcare system. However, once genes are edited in humans, then the ‘changes’ made in the human genome are passed-on to the offspring or next generation, which raises ethical and moral questions.

In a recent interview to MIT Technology Review on the potential of CRISPR in developing engineered babies, American biochemist Dr Jennifer Doudna, who co-developed CRISPR and won a Nobel prize in 2020 along with her colleague Emmanuelle Charpentier said that ‘at present, CRISPR should not be used clinically on humans. I think we’re still at a point where it’s not appropriate to use CRISPR in human embryos,” she said. 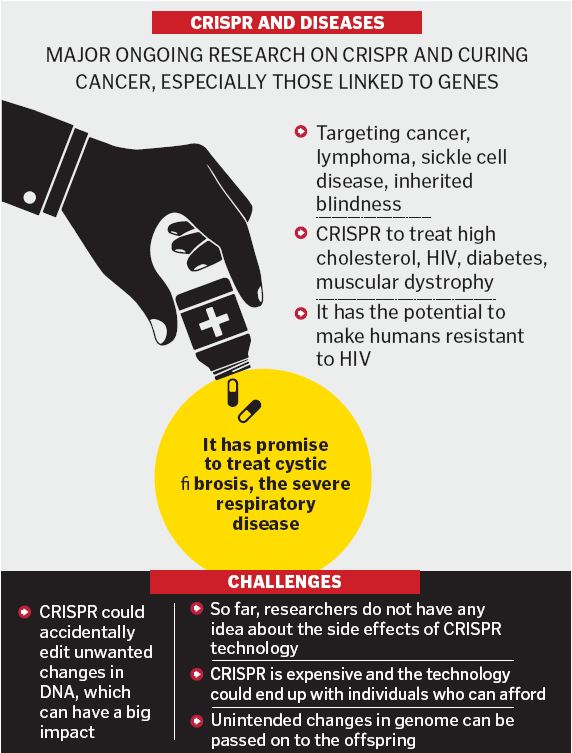 So, what is CRISPR?

CRISPR is a tool that provides researchers the ability to edit genes, which in turn helps clinicians to understand the function of genes and their genetic role in causing disease in organisms.

CRISPR is a technique that enables researchers to cut out glitches in the genes that have the potential to cause disease. Universally, CRISPR is considered a fast and simple way to edit-out unwanted traits in human genes. It is a small bit of DNA, which is present in the immunity system of bacteria. When a virus attacks, bacteria employ ‘Cas protein’ to cut a part of the virus DNA and store it in its CRISPR region.

Later, when the same virus attacks again, bacteria have the ability to pull up the ‘cut part of virus DNA’ and copy it. The copy now fights the virus and hunts it down.

Although still in its infancy, CRISPR research in India is led by Government-run genetic laboratories pursuing research in the field. Recently, CSIR-Institute of Genomics and Integrative Biology, Delhi utilised CRISPR to develop the Covid-19 diagnostic tool FELUDA, which was also launched by the Tata Group.