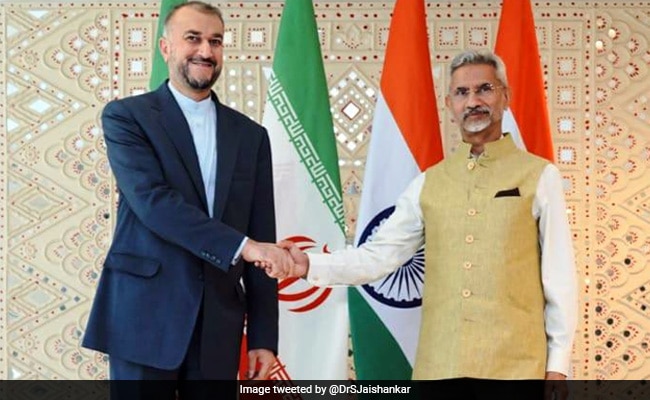 Iran is satisfied with the efforts made by the Indian government in dealing with those responsible for comments on Prophet Muhammad, the visiting Iranian Foreign Minister Hossein Amir Abdollahian said.

Abdollahian, who is on his first visit to India since he assumed office last year, raised the issue of the controversial remarks, made by two former BJP spokespersons, in his meeting with National Security Advisor Ajit Doval in the national capital on Wednesday.

The Iranian Foreign Ministry in a statement said that Abdollahian had raised the issue with Doval, and was satisfied by the response he received.

The NSA Ajit Doval, it said, reaffirmed the Indian government and officials’ respect for the Prophet Muhammad saying offenders will be dealt with at the government and related bodies in an exemplary manner.

“Ajit Doval reaffirmed the Indian government and officials’ respect for the Prophet Muhammad (PBUH), saying offenders will be dealt with, at the government and related bodies levels, in such a way that others will learn a lesson,” the Iranian foreign ministry statement read.

“Amirabdollahian said Muslims are satisfied with the stance of Indian officials in dealing with the culprits,” the statement added.

Amirabdollahian hailed the Indian people and government for their respect for the divine faiths, especially the Prophet Muhammad and also for the religious tolerance, historical coexistence and friendship among followers of various religions in the country. The Iranian foreign minister also called for serious attention to the sensitivities of Muslims regarding their religious sanctities.

A Bharatiya Janata Party spokesperson was suspended on Sunday from the party’s primary membership after her alleged inflammatory remarks against minorities, which drew sharp reactions from Gulf countries.

In his meeting with NSA Doval in New Delhi on Wednesday, the visiting Iranian foreign minister Amirabdollahian recognised India for its religious tolerance, and friendship among followers of various religions in the country.

The Iranian Foreign Ministry said Amirabdollahian and Jaishankar held two rounds of talks, during which a broad range of issues of mutual interest between the two countries in strategic, political, economic and cultural spheres, were discussed.

Amirabdollahian pointed to the fact that the economies of Iran and India complement each other and also to the existence of huge potential for expansion of trade and economic relations between the two countries.

The Iranian foreign minister then underlined the necessity of coming up with a roadmap to promote comprehensive and vast strategic ties between Tehran and New Delhi.

The two ministers also exchanged views on the Ukraine conflict and its repercussions. During delegation-level talks, Jaishankar and his Iranian counterpart discussed the entire gamut of bilateral relations including political, cultural and people to people ties.