Massive Protests In Delhi, UP’s Saharanpur Over Remarks Against Prophet 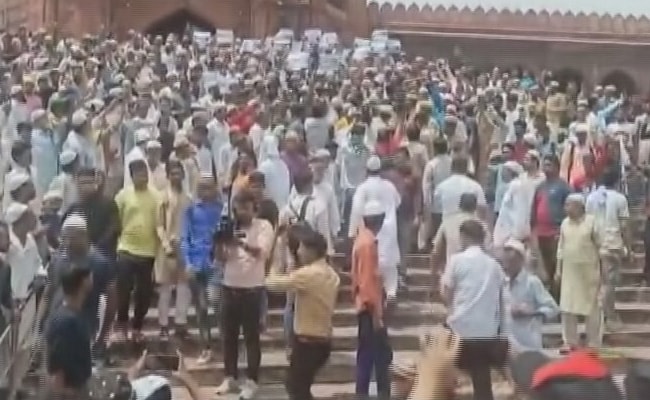 Protesters gathered outside the Jama Masjid in Delhi.

Huge protests flared in Delhi and Uttar Pradesh’s Saharanpur on Friday over remarks by suspended BJP spokesperson Nupur Sharma and her former colleague Naveen Kumar Jindal who are yet to be arrested weeks after triggering a massive controversy with their remarks about Prophet Muhammad.

The protests in Delhi erupted outside the Jama Masjid, one of the largest mosques in India, after the Friday prayers.

The police in Delhi on Thursday had said they have filed a complaint against a Ms Sharma, Mr Jindal and others for “inciting people on divisive lines” on social media.

The move came after many Muslim-majority countries condemned India over the comments by the spokespersons for the country’s ruling party.

Calls have grown for a boycott of Indian products in Gulf countries, while the BJP has suspended Ms Sharma expelled Mr Jindal and asked its spokespeople to speak more responsibly in public.

Delhi Police said they had registered two preliminary complaints – known as first information reports – on the basis “of social media analysis against those trying to disrupt public tranquillity & inciting people on divisive lines”.

“One pertains to Ms Nupur Sharma & the other against multiple social media entities,” the department said on Twitter, without specifying what posts triggered the complaint and what were the entities.

“Even as notices are being sent to social media intermediaries for details of those behind these accounts/entities, #DelhiPolice appeals to everyone to desist from posting anything that may disrupt social and communal harmony.”

Ms Sharma said on Twitter on Sunday her comment on the prophet was in response to “continuous insult and disrespect” towards a Hindu god during the TV debate, but that she had withdrawn her statement.