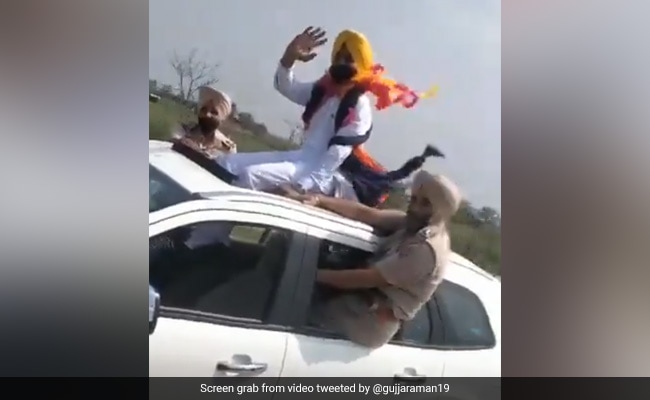 Punjab minister is seen sitting on the roof of his SUV.

A video of Punjab Transport Minister Laljit Singh Bhullar is going viral on social media. It shows the minister standing through the sunroof and his two security personnel dangling out of one of the SUVs in the convoy.

The undated video shows the minister waving his hand while a Punjabi song is heard in the background. While Mr Bhullar is in Ford Endeavour, two Maruti Gypsies of Punjab Police are escorting, and a white BMW is seen following the cars.

The video has been shot while the convoy is passing by the fields near the National Highway.

The minister’s stunt is being slammed by users on Twitter, who also question why is he putting the lives of his security personnel at risk.

Some users also point out that it is illegal to travel sitting on the roof of the car.

“Just three months and as expected… here they are,” a user tweeted.

“Why are you putting your life and that of others at risk? Punjab Transport Minister Laljit Singh Bhullar ji why are you violating traffic rules and putting the lives of your security personnel at risk,” another user said on the micro-blogging website.

The minister, meanwhile, said in his defence that the video is three months old when the Aam Aadmi Party (AAP) won by a landslide in Punjab and “has been made viral by opposition parties”.

“I am a responsible and law abiding citizen of this country. This is a conspiracy to discredit me,” the minister further said in his tweet.

Mr Bhullar was among the first 10 to take oath in the new Cabinet headed by Chief Minister Bhagwant Mann. He had defeated Parkash Badal’s son-in-law Adaish Pratap Singh from Patti by a margin of 10,999 votes in Punjab Assembly elections earlier this year.