The Narendra Modi-led Bharatiya Janata Party government at the Centre is facing a huge diplomatic outrage from Gulf countries after its spokesperson and leader made derogatory references to Islam and Prophet Muhammad. New Delhi is struggling to contain the damaging fallout.

Arab nations lodged official protests against India. Pakistan and Afghanistan also reacted strongly to the comments made by Nupur Sharma and Naveen Jindal. Anger flooded social media and there are calls for boycott of Indian goods in some Arab nations. The six-member Gulf Cooperation Council —  Saudi Arabia Bahrain, Kuwait, Oman, Qatar and UAE — was joined by Indonesia, the Maldives, Jordan, Libya and Afghanistan in condemning the ‘hurtful comments’.

It was only when a sudden chorus of diplomatic outrage began with Qatar and Kuwait summoning their Indian ambassadors to protest that the BJP swung into action. It suspended Sharma and expelled Jindal and issued a rare statement saying it “strongly denounces insult of any religious personalities.”

Later, Saudi Arabia and Iran also lodged complaints with India, and the Jeddha-based Organisation of Islamic Cooperation stressed that the remarks came in a “context of intensifying hatred and abuse toward Islam in India and systematic practices against Muslims.”

Indian embassies in Qatar and Kuwait released a statement saying the views expressed were not those of the Indian government and were made by “fringe elements.” Qatar’s foreign ministry said it expected a public apology from the Indian government, and Kuwait warned that if the comments go unpunished, India would see “an increase of extremism and hatred.”

The Grand Mufti of Oman described the “obscene rudeness” of Modi’s party toward Islam as a form of “war.” Riyadh said the comments were insulting and called for “respect for beliefs and religions.” And Egypt’s Al-Azhar Mosque, the Sunni world’s foremost institution of religious learning, described the remarks as “real terrorism (that) can plunge the entire world into severe crises and deadly wars.” Bangladesh too joined the protests on Friday.

Interestingly, when US Secretary of State Antony Blinken said India was seeing “rising attacks on people and places of worship,”, it elicited a strong response from New Delhi, which rejected the comments as “ill-informed.”

So what makes the Gulf so powerful and what made the Modi government, which seldom sees Prime Minister speaking against his party leaders who blatantly indulge in hate speeches, promptly take corrective steps?

The reasons are not far to seek. India maintains strong relations with Gulf nations, which rely on millions of migrant workers to drive the machinery of daily life. India also depends on oil-rich Gulf countries, such as Saudi Arabia, to power its energy-thirsty economy. Nearly 60% of India’s imports from the GCC countries are crude and natural gas.

During 2020-21, India imported goods worth $110.73 billion from the six GCC nations. Exports stood at $44 billion to these nations. Of about 32 million non-resident Indians (NRIs), nearly half are estimated to be working in Gulf countries. These NRIs send a significant amount of money back home.

In 2021, India and the UAE started negotiation for a wide-ranging economic pact under India’s Comprehensive Economic Partnership Agreement (CEPA), which was completed this year. “Negotiations for CEPA were launched in September 2021 and have been completed. The agreement will take India-UAE economic and commercial engagement to the next level,” India’s Ministry of External Affairs said in February.

The visit of Saudi King Abdullah to India in January 2006 was a watershed moment that resulted in the signing of the ‘Delhi Declaration’. Prime Minister Dr Manmohan Singh’s visit to Saudi Arabia in 2010, led to the signing of the ‘Riyadh Declaration’ elevating the bilateral relationship to a ‘Strategic Partnership’  to  expand ties in political, security, defence, economic and cultural areas.

The Gulf constitutes the “immediate” neighbourhood of India separated only by the Arabian Sea. India, therefore, has a vital stake in the stability, security and economic well-being of the Gulf.

One of India‘s major foreign policies today is to counter rising China. According to the Chinese Ministry of Commerce, trade between China and GCC countries exceeded $171 billion in 2017. China is also aggressively pursuing the Gulf region for signing FTAs. It has also been promoting cooperation with GCC countries under the Belt and Road Initiative, according to reports.

The emerging relations between India and some GCC countries are no longer restricted to traditional oil-energy or remittance. They are gradually entering the security domain as well. India has bilateral defence cooperation with Saudi Arabia, UAE, Oman and Qatar for military training, intelligence sharing, combating terrorism and money laundering.

“The ‘Abraham Accord’ announced on 13th August 2020 between Israel and UAE is an endorsement for the balanced ‘Look West’ policy of India for peace and stability in the region. US strategic shift to Indo-pacific and growing Chinese expansion in the region has created a new great power competition in the region. India needs to pursue the path of multilateralism and prudently use the leverages with Russia and USA to position itself as a credible power in the region in the emerging Asian Century World Order,” writes Dr Khushnam PN, an analyst, in Diplomatist.

Saudi Arabia: Was the fourth-largest trading partner last fiscal. Total bilateral trade increased to about $43 billion in 2021-22 from $22 billion in the previous fiscal

Qatar: India imports 8.5 million tonnes of LNG from Qatar a year and exports products ranging from cereals to meat, fish, chemicals and plastics. Commerce between India and Qatar rose to $15 billion in 2021-22 from $9.21 billion in 2020-21.

Kuwait: It was the 27th largest trading partner of India in the last fiscal. Bilateral trade jumped to $12.3 billion in 2021-22 as compared to $6.3 billion in the previous financial year.

Bahrain: Two-way commerce with India stood at $1.65 billion in 2021-22 as against $1 billion in 2020-21.
• Besides, India’s bilateral trade with Iran aggregated to $1.9 billion in 2021-22 as compared to $2.1 billion in 2020-21
• India mostly imports crude oil and natural gas from the Gulf nations like Saudi Arabia and Qatar, and exports pearls, precious and semi-precious stones; metals; imitation jewellery; electrical machinery; iron and steel; and chemicals
• India is looking at negotiating a free trade agreement with the grouping. It implemented a comprehensive trade pact with the UAE on May 1 with an aim to boost bilateral trade to $100 billion in the coming years
• ‘India-UAE start-up corridor,’ aims to raise 10 unicorns by 2025.

• GCC nations account for nearly 65% of India’s annual remittances of more than $80 billion in the last three years
• Host a bulk of Indian migrants
• According to a November 2021 report of the World Bank, India got $87 billion in foreign remittances in 2021. Of this, a sizeable portion came from the GCC nations
• In 2018, the Reserve Bank of India said over 50% of the remittance inflow to India came from GCC nations

India and GCC signed a Framework Agreement for enhancing and developing economic cooperation between the two sides in August 2004. Two rounds of talks for finalising aspects like tariff rules, rules of origin, etc., have been held. The India-GCC FTA is under negotiation. 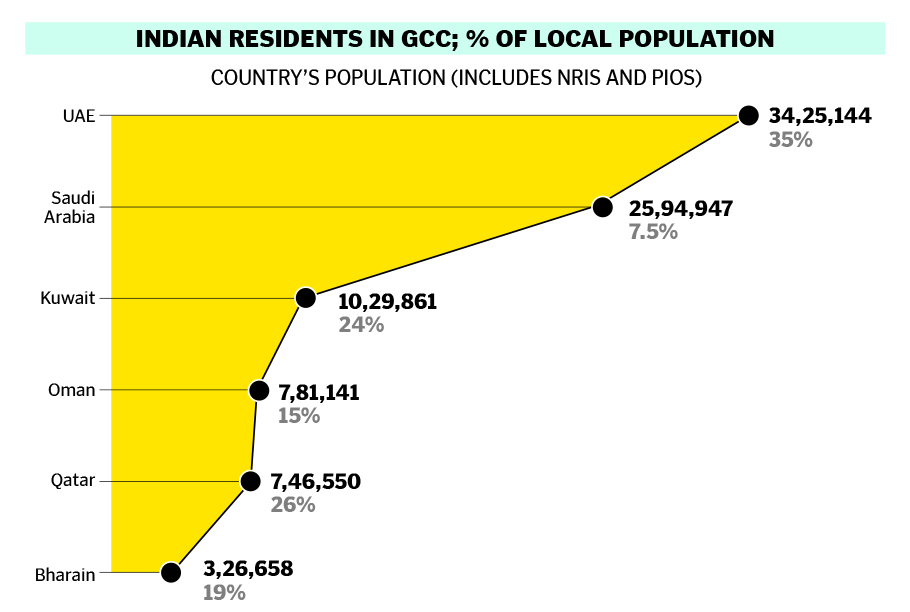 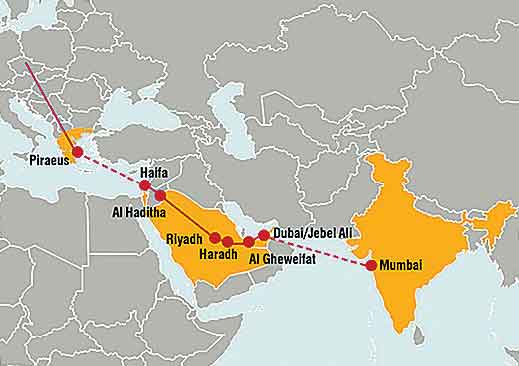 The road, ship and rail network would connect India with Arab countries and Greece (gateway to European markets). The corridor is seen as a possible answer to China’s BRI.

Instead of Chabahar, the ports of the UAE would link through the Indian Ocean connectivity node. From Mumbai, Indian goods through this route can arrive in Europe in less than 10 days, cutting by 40% the time taken in the Suez Canal, the author says.

Foreign Ministers of India, UAE, Greece, Cyprus, Israel, Saudi Arabia, met during the 12th Sir Bani Yas Forum in November 2021 at Dubai and discussed the corridor’s progress, according to reports.