On Camera, UP Cops Savagely Thrashing Men Is Return Gift For BJP MLA

Around nine men beg and try to block blows raining incessantly on them from two policemen armed with sticks in what appears to be a police station, but in vain.

A video of the incident shared by an Uttar Pradesh BJP MLA on Twitter with the caption “return gift for rioters” has triggered criticism of the cops and allegations of police brutality by the opposition.

Mr Tripathi shared no details of where the incident took place or when.

According to reports, the video was shot two days ago in a police station in Saharanpur, where protests and clashes erupted after Friday prayers over the controversial remarks against Prophet Muhammad by two former BJP spokespersons.

“Questions should be raised about such police stations… UP is No. 1 in custodial deaths, it is a leader in human rights violations and abuse of Dalits,” the Samajwadi Party chief said. 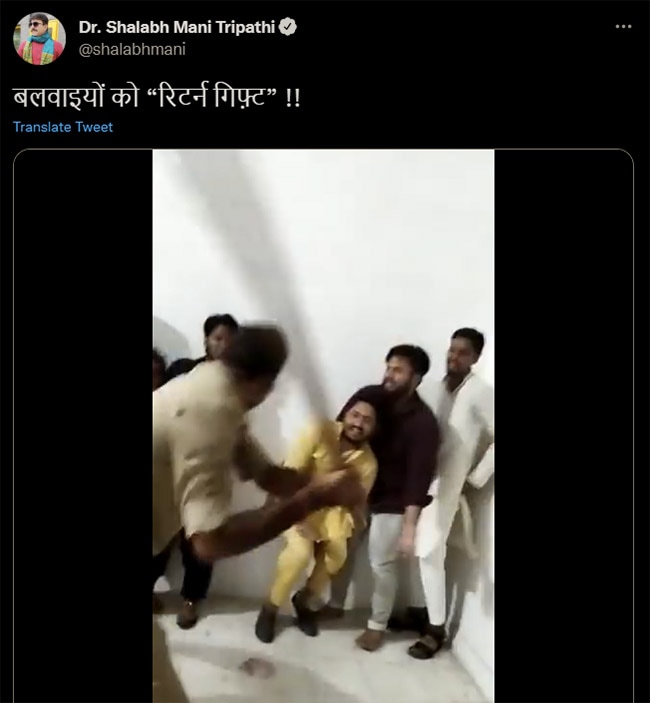 The Uttar Pradesh Police have arrested over 300 people from various districts in the state in connection with Friday’s protests and violence, with Chief Minister Yogi Adityanath warning of “strictest” action against those attempting to vitiate the atmosphere.

In Saharanpur and Prayagraj, police officials said action will be taken against those arrested under the stringent National Security Act (NSA).

Among those arrested, 91 were held in Prayagraj and 71 in Saharanpur and 51 in Hathras, the police said.

In a tweet in Hindi, Mrityunjay Kumar, the media advisor to the Chief Minister, said, “Unruly elements remember, every Friday is followed by a Saturday” and posted a photo of a bulldozer demolishing a building.

Under Adityanath, the state administration has been cracking down on criminals and riot accused, seizing or razing their properties, even before their conviction. His critics have often accused him of adopting strong-arm, extra-judicial tactics.

Uttar Pradesh’s Prayagraj, Saharanpur saw violent protests on Friday as demonstrators angered by the remarks against Prophet Muhammad threw stones at police personnel after Friday prayers in mosques. Several other cities in the state and across the country saw protests as well.

In Prayagraj, a mob set on fire a few motorcycles and carts and also attempted to set ablaze a police vehicle.

Police used tear gas and sticks to disperse the protesters and restore peace. A policeman was injured, according to police.

Nupur Sharma was suspended by the BJP as several Islamic nations slammed her comments on the Prophet during a TV debate.

In Saharanpur, protesters shouted slogans against Ms Sharma and demanded the death sentence for her. There were protests in Bijnor, Moradabad, Rampur and Lucknow as well.