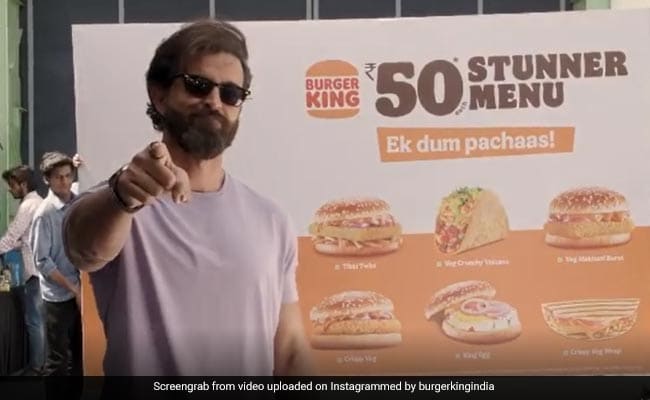 The video posted online has taken the internet by storm.

Hamburger fast-food chain Burger King recently came up with a “Jugaad” advertisement, featuring Bollywood actor Hrithik Roshan, which has left the internet baffled. Mr Roshan was spotted at film-city when Burger King took the opportunity to pull a fast one.

Stepping out from his vanity van, the actor posed for a few photographs for the paparazzi before heading inside the studio. But little did Mr Roshan know the fast-food chain had a billboard placed strategically behind him to make it appear he was endorsing the “Rs 50 Stunner Menu” of Burger King while being papped.

The clip posted online has got people talking. It shows Mr Roshan posing for a paparazzi shot when two people carrying a huge banner for Burger King’s latest offer took the opportunity to advertise their new menu. They cleverly placed it right behind the Bollywood actor – timed exactly when he was posing for the paps.

Mr Roshan did catch up with what had happened. Taking to Twitter, he shared the video of the advertisement and wrote, “@burgerkingindia, this is not done.”

However, the video shared last week caught the internet’s attention. Brands including Zomato, Spotify and Swiggy too chimed in. Spotify India hilariously wrote, “Jugaad is playing dhoom machale in the background to feel that Bollywood main character energy.”

Meanwhile, internet users were also quick to react to the video. “Ye mere shaktiyonka galat istemal kiya gaya hai,” wrote one user. “Staged but nicely played,” said another. Others simply hailed the advertising concept and called it a “superb” idea.