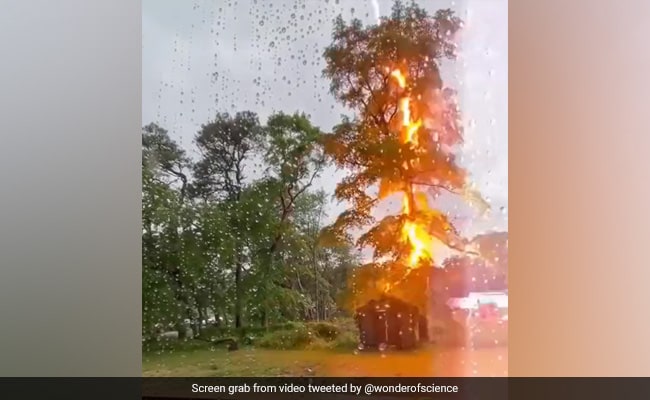 The video has garnered nearly 30,000 views and thousands of likes.

We all know about the dangers of lightning and how we must avoid standing under trees during thunderstorms. But if you still need more incentive to remember this, a look at this viral video is sure to do the trick.

Shared on Twitter by Wonder of Science, the clip shows a lightning bolt striking a tree right in the middle of the trunk. “This is why you should never stand under a tree during a storm,” read the caption of the post.

This is why you should never stand under a tree during a storm.

Since being shared, the video has garnered nearly 30,000 views and thousands of likes. It has left internet users in shock.

While one user wrote, “That poor tree ain’t ever growing leaves again,” another said, “Standing under a tree is literally the worst place to be. This is the most unsafe place to be during a storm.” A third user added, “Approximately how far from the tree would a person have to be to make an easier lightning rod thqn the tree itself? I thought Humans were pretty good about being a ground in a lightning storm so as such you get near something that will ground out sooner.”

The location where the incident took place is unknown.

Meanwhile, in another shocking incident, a 15-year-old girl in the United States survived a lightning strike that hit her home in Pennsylvania in May. The lightning went through Giana Scaramuzzo‘s pinky finger and out of her left leg. The teenager was alright after the incident and was treated by the paramedics.

The same month, a lightning strike had also destroyed a single toilet in an apartment building in Oklahoma. According to Newsweek, experts say that around 10% of people who are struck by lightning die, most commonly due to heart attacks.