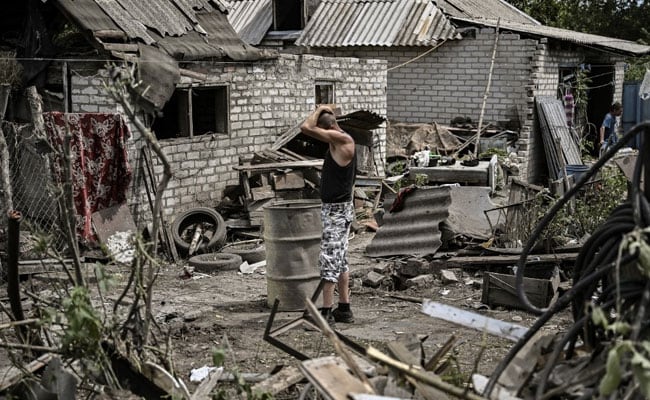 At the entrance to the city, the roadside had craters from shelling.

Maksym Katerin was red-eyed Monday as he showed the fresh graves of his mother and stepfather, scattered with rose petals, in his garden in Ukraine’s frontline city of Lysychansk.

On Sunday afternoon at around 5 pm, a shell ripped through his peaceful garden with its piglets and chickens, instantly killing his mother Nataliya and her husband Mykola, both 65, leaving their mutilated bodies on the ground.

“I don’t know who did this, but if I knew, I would tear off their arms,” said Katerin.

After months of shelling, the strategic city in eastern Ukraine is massively damaged with no water, electricity or phone signal.

Ukrainian artillery uses its high ground to exchange fire with Russian forces fighting for control of Severodonetsk, just across the river.

Katerin’s neighbour Yevgeniya Panicheva wept, saying Katerin’s mother “was lying here, her stomach was ripped and her guts were falling out. She was a very good, kind and helpful woman. Why did they do this to her?”

Their leafy street lined with mulberry and cherry trees lies close to Russian forces just across the river, with Ukrainian artillery positioned nearby. One house was completely obliterated by earlier shelling and an unexploded device could be seen sticking out of the road.

They were not the only Lysychansk residents to die Sunday: a six-year-old boy was also killed, police told AFP, showing a photo of the crater from the shell, which scattered deadly shrapnel.

In the city centre, severed power cables lay in the street, with burnt-out shopping malls and the acrid smell of smoke in a yellow sky.

In one street, smoke rose from charred, roofless houses.

One policeman described the situation as “the pits”.

“Shells are flying in and hitting the city centre,” he said, while his colleague added: “It’s 24/7.”

“With every day, you see for yourself that the shelling doesn’t diminish, it is only intensifying,” Oleksandr Pokhna, a lieutenant-colonel in Lugansk region’s police special forces, told AFP.

Pokhna said police were trying to encourage as many residents as possible to go to evacuation points to be taken to safer parts of the country.

At the entrance to the city, the roadside had craters from shelling and a cluster bomb stuck up from the ground. There were burnt-out cars at a checkpoint.

The few people out were on foot or bicycles.

Residents standing in line for greenish non-drinking water at the fire station said they were unable to leave, blaming lack of money or relatives, or the need to look after small children and pets.

“We have small (twin) babies of five months and so we can’t leave anywhere, we sit in the cellar,” said Sergiy, a metal worker.

Some called for negotiations to end the conflict.

Many, seeing only Ukrainian forces and completely cut off from sources of information, insisted that Kyiv’s troops were responsible for the shelling.

One angry woman, who declined to give her name, said: “It’s the Ukrainians bombing us. They don’t consider us to be people. They call us separatists.”

“It was our own people — the Ukrainians,” an elderly man agreed.

Many locals in the Donbas coal-mining region feel little connection to Kyiv, and talk of taking “trips” to Ukraine.

Special forces police officer Pokhna acknowledged this mood but stressed: “The Ukrainian army is only defending itself.”