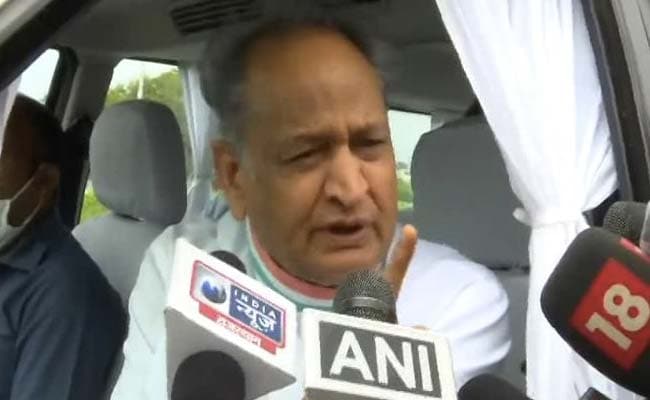 Ashok Gehlot also asked the Prime Minister Modi to address other issues in the country. (File)

Rajasthan Chief Minister Ashok Gehlot on Tuesday condemned the questioning of Congress leader Rahul Gandhi which went on till midnight by the Enforcement Directorate in the National Herald case.

“Law is the same for everyone, but questioning someone till 12 midnight is wrong. Which crime or money laundering has taken place? Where there is loot of trillions, they do not inquire,” Rajasthan Chief Minister told reporters.

Hitting out at Prime Minister Narendra Modi, Mr Gehlot said, “I would like to tell PM Modi that God gave you the chance to be the PM of the country. Don’t make CBI, Income Tax, or ED treat the people of the country like this, or else the country will not spare you either.”

His remarks came in wake of Congress leader Rahul Gandhi’s questioning by the Directorate of Enforcement (ED) over the National Herald case.

He also asked the Prime Minister to address other issues in the country.

“Be it the BJP or the RSS, everyone is looting, they are not paying attention to it. Prime Minister should come forward and address on inflation, unemployment, tension, violence,” he added.

Rahul Gandhi left the Enforcement Directorate office in Delhi after 10 hours of questioning in the National Herald case and has been asked to rejoin the investigation again on Tuesday.

Earlier, Congress leader Harish Rawat on Monday forayed in to continue the hustle over the Directorate of Enforcement’s (ED) summons for Rahul Gandhi and said that the party will continue this fight tomorrow.

“We will continue this fight tomorrow as well. The struggle of Congress party will continue until they (Central government) try to suppress the voice of Rahul Gandhi and our party,” Rawat told reporters.

Congress MP Shaktisinh Gohil also said that the party had been fighting for truth.

“The country is standing with Rahul Gandhi. We are fighting for the truth. We will sit and discuss with our party chief and take the decision about the further steps to be taken,” said Mr Gohil.

Congress leaders and workers had staged protests holding placards at AICC headquarters in New Delhi over the summons of Rahul Gandhi.

Addressing the media, Baghel said, “The entire country is witness to the dictatorship of the ruling BJP. Congress workers were being detained from reaching the party headquarters. The entire area has been cordoned off and police have been deployed all around in an attempt to crush democracy. It is the democratic right of the opposition party to protest.”

Calling the ED action on Rahul Gandhi “malicious”, the Chief Minister said that the Centre is using its agencies to “suppress the voice of Opposition”.

Rahul Gandhi, the 51-year-old politician, who entered the headquarters of the federal probe agency in central Delhi around 11 am after starting from the Congress office on Akbar Road, was accompanied by a large group of party leaders including Priyanka Gandhi Vadra, RajasthanChief Minister Ashok Gehlot, and Chhattisgarh CM Bhupesh Baghel.

He is being questioned by an Assistant Director level officer– the investigating officer of the case–supervised by a Deputy Director and a Joint Director.

Another officer is learnt to be typing Rahul Gandhi’s statement which is being recorded under Section 50 of the Prevention of Money Laundering Act.