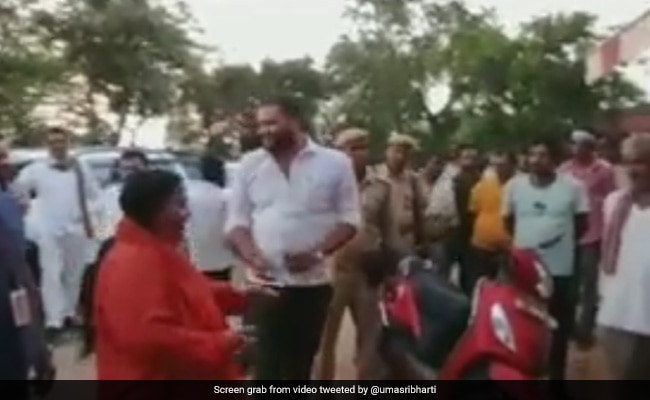 Madhya Pradesh: BJP’s Uma Bharti said it was a “crime” to open a liquor outlet in the holy town of Orchha

Senior BJP leader Uma Bharti threw cow dung at a liquor shop in Orchha town of Madhya Pradesh’s Niwari district, amid her demand for total prohibition in the party-ruled state.

After the incident on Tuesday, Uma Bharti in a tweet claimed the shop was not approved for the spot where it was located, and that it was a “crime” to open such an outlet in the holy town of Orchha.

However, police said the shop was located at the place where it was sanctioned.

A video surfaced on social media in which Uma Bharti was seen throwing cow dung at the liquor shop on Tuesday evening in Orchha, a religious town famous for the Ram Raja temple, located 330 km from the state capital Bhopal.

In the clip, Uma Bharti was heard telling the person shooting the video, “See, I have thrown the cow dung and not thrown stones.”

In March this year, the former chief minister had thrown a stone at a liquor shop in Bhopal.

In a series of tweets on Tuesday night, Uma Bharti said, “The shop, located at the main entrance of Orchha, is not approved for its current location, but for a distant village. The people and our organisation members staged protests against it continuously.”

In another tweet, she said people submitted memorandums to the government and repeatedly appealed to the administration to remove this shop, because “It is a big stigma on the forehead of this holy city.”

“By all means, the people’s reaction against this shop cannot be termed a crime, because opening a shop here (at a religious place) is a bigger crime,” she said.

Uma Bharti said she got information that this shop remained open when five lakh lamps were lit on Ram Navami (in April this year) under the ‘Deepotsav’ programme organised in Orchha, which, she said, is considered as holy as Ayodhya.

“That’s why I have sprinkled some cow dung from a holy cowshed on the liquor store,” she said.

The BJP leader said it is shameful that despite a protest by organisations belonging to “our ideology”, the shop is still open.

Meanwhile, Orchha police station in-charge Abhay Singh said the liquor shop was located at the place where it was sanctioned.

The liquor contractor shut the shop temporarily after cow dung was thrown on it, he said.

Earlier, in March, Uma Bharti had walked into a liquor shop in Azad Nagar area of Bhopal and thrown a stone at alcohol bottles kept on a shelf there.

In the current financial year, the BJP government in Madhya Pradesh has under its new excise policy permitted setting up of home bars and slashed the retail price of liquor by 20 per cent.