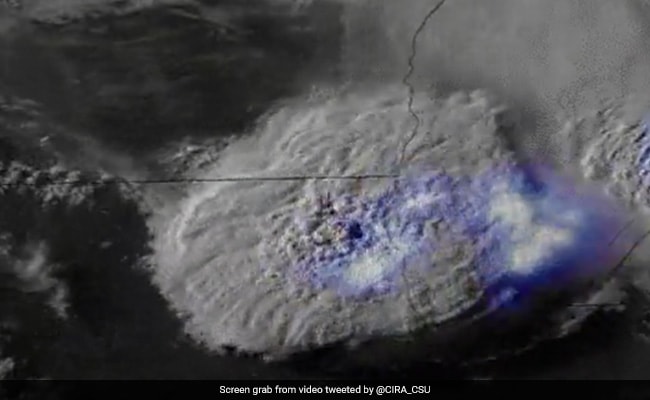 Video shows sheer size of a powerful storm that swept across the Chicago.

A satellite video showing a “tornadic supercell” forming over Chicago, US, has gone viral on social media. According to NBC News, powerful storms, tornado-like conditions and hail ripped through the Chicago area on Monday, leaving flash flooding, downed trees and powerlines and residential damage in its path.

Amid such harsh weather conditions, a video, posted by the Cooperative Institute for Research in the Atmosphere (CIRA) and made available by Storyful, has taken the internet by storm. “Impressive satellite view of the severe storm that trekked through Chicago this evening,” read the caption of the post.

Impressive satellite view of the severe storm that trekked through Chicago this evening. pic.twitter.com/KvBx6BT2YS

A supercell is a thunderstorm characterised by the presence of a mesocyclone – a deep, persistently rotating updraft. It is also referred to as rotating thunderstorms. They are often isolated from other thunderstorms and can dominate local weather up to 32 kilometres away.

The timelapse satellite imagery from CIRA shows the sheer size of a powerful storm that swept across the Chicago area earlier this week. In a Facebook post, the US National Weather Service informed that the tornadic supercell moved across the Chicago region. The weather service also issued warnings about damaging wind, hail and lightning.

As per NBC, around 40,000 customers were left without power after the storm. Multiple buildings were even damaged and trees downed. At least 18 families were displaced, and two people rushed to the hospital for minor injuries.

The outlet reported that the severe storm cell has moved out, and extreme heat and dangerous humidity have moved in.

The United States started experiencing a number of extreme weather events from Monday. A video from around Yellowstone National Park shows a house being swept away. The park was reportedly forced to close to visitors, leaving people living in the vicinity of the park trapped without access to safe drinking water.