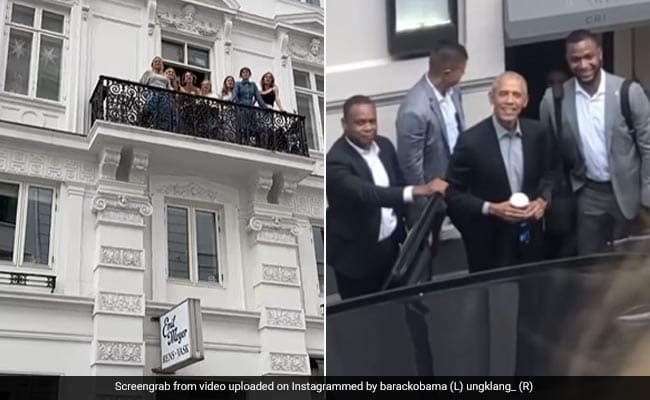 The choir sang a portion of Hans Christian Andersens ‘In Denmark I was Born’.

Former American President Barack Obama recently shared a video of a group of singers singing in soulful voices in Copenhagen.

Taking to Instagram, Mr Obama wrote, “When I was in Copenhagen, I ran into this group of singers who were rehearsing on their balcony. They were fantastic — take a listen.”

Since being shared, the video posted by the former US President has gathered millions of views. The clip has even prompted people to post various comments.

One user wrote, “Imagine singing on a balcony in Denmark and the best President ever walks by and listens.” “I love the aesthetic and the atmosphere! It must have been their honour and yours as well, Mister President,” wrote another.

Barack Obama was in Denmark recently to attend the 2022 Copenhagen Democracy Summit.

Another video doing rounds on the internet also showed the former President stepping out of his hotel, Hotel d’Angleterre, and looking up at the all-female choir in Denmark.

Video shared on Instagram showed the view of Mr Obama looking up at the balcony. The caption of the post read, “Today our rehearsals started out completely unexpected and amazing! We have just started rehearsing for our upcoming projects, after which we hear a little street noise from the balcony. Suddenly, former President Obama steps out of D’Angleterre’s basement and catches sight of us.”

As per the caption, Mr Obama even asked the group what they were doing. “We’re singing” the choir answered in chorus. “Oh, let me hear,” the former President then said.

The video shows Mr Obama waving to the group and gesturing with his hand to one of his ears. The choir sang a portion of Hans Christian Andersen’s In Denmark I was Born. Obama was very impressed as he reportedly even said, “Wow, that was fantastic.”

In the end, Mr Obama wished the group a good day before being driven away.

Much like the former President, internet users too seemed delighted by the all-female choir and thanked them for sharing the moment.