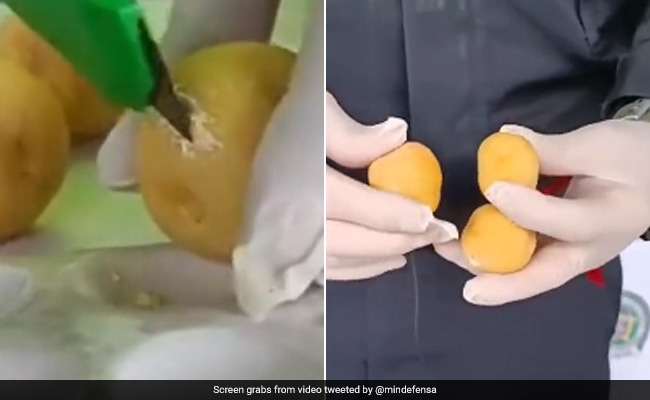 According to the police, the lack of an expiration date raised alarm bells.

The police in Colombia have seized more than 1,300 kilograms of cocaine disguised as frozen potatoes and chips, the ABC News reported. Authorities said they consider it as one of the most innovative attempts to traffic drugs in recent years, the report further said.

According to the police, the lack of an expiration date raised alarm bells.

The drug haul was highlighted by Colombia’s Ministry of National Defence on Twitter on Thursday, along with a video of the checking process employed by the narcotics officials.

“The intelligence of the @PoliciaColombia dealt a resounding blow to drug trafficking by seizing a shipment of refrigerated and vacuum-sealed cocaine simulating yuccas and Creole potatoes. The shipment was destined for Spain,” says the tweet.

Recently in India, In view of a rise in smuggling of drugs into the high-security Tihar jail in Delhi, the prison authorities plan to deploy a dog squad to curb the menace.

A four-member canine unit is being raised for the Tihar prison, according to a senior official. It will then be expanded to the national capital’s Rohini and Mandoli prisons.

According to the official, the authorities would procure puppies who will be trained alongside two handlers at Central Reserve Police Force (CRPF), Indo-Tibetan Border Police (ITBP), and Border Security Force (BSF) training centres.