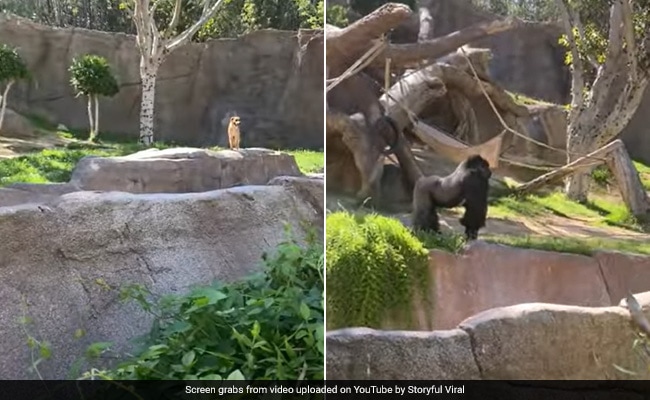 The dog was a year-and-half-old male shepherd with no microchip.

A dramatic video captured the moment a stray dog wandered into the gorilla enclosure at the San Diego Zoo Safari Park in the United States.

According to San Diego Humane Society, staff and guests were shocked to see a dog inside of the gorilla enclosure, following which they called the organisation for help. It is still not clear how this happened, however, a video, captured by visitor Desteniey Pickett and made available by Storyful, is going viral on the internet.

In the footage, the gorilla is seen chasing the stray dog that managed to enter its enclosure. It also shows the dog running from one side of the enclosure to the other, as a large gorilla named Frank stomps closely behind. The viral video shows both the animals in a cat-and-mouse chase, as onlookers can be heard shouting the gorilla’s name in hopes of distracting the ape.

In the end, a zookeeper is also seen throwing feed from above the enclosure. Speaking to Storyful, Mr Pickett said, “I was worried the silverback was going to grab the dog. I was very anxious the entire time, waiting for employees to come.”

In a social media statement, the San Diego Humane Society informed that the dog was successfully removed from the enclosure. “This adventurous dog, nicknamed “Mighty Joe Young,” is now receiving care at our Escondido Campus, and our staff shared that he, while did not have a microchip or collar, he is in full health and extremely friendly,” the organisation said.

It also added that no Safari Park animals, staff, or guests were harmed during the incident. The dog was a year-and-half-old male shepherd with no microchip. The search for a potential owner is underway.