Immerse in ‘Ocean’ of tranquility that melts your stress away

Ocean – The place in your heart, is a game like Sky, Abzu, Flower, and Journey; one that wants its players to sit back, relax and take in its sights and the music.

It accomplishes its set-out goals to a great degree as five minutes into the game it manages to not just calm you down but keeps you hooked for longer play sessions where it offers you the opportunity to enter a contemplative state – one where you can feel the calmness of the ocean and get lost in the background score.

The game borrows a bit from games like Pokémon where it encourages you to pet the fish and communicates with them as they shower you back with love in the shape of pink floating hearts. Ocean is quite similar to games like Flower as its systems require you to work towards building a school of fish as large as possible. The more you level up and the larger your sanctuary gets, you unlock newer kinds of fish and weeds, this is a game that encourages you to both collect and level up without feeling the grind a bit, if possible – in a state of tranquility.

What stood out with Ocean was the simplicity of levelling up as they were designed as simple button taps and nothing more –as mere afterthoughts that are designed to emanate a calming essence in the form of soothing sounds. There is nothing here that the game requires you to do as even the levels mean so little, for instance, my Luna was over level 100 in my first hour with the game!

Ocean gets it very nearly right when it asks you to focus on the ‘now’ rather than thinking and strategising ahead like other F2P games.

However, Ocean isn’t perfect as despite the perfect hue of ocean blue and a great bit of music it all gets a little too ‘still,’ a little too soon. The camera view is limited, and the setting is constant, there is too little for you to do and the same bit of music on an endless loop does get repetitive after a while.

Unlike games like Flower, Sky or Journey, the player’s interactions are limited to button taps and switching the camera view thus, the ability to be lost in the moment – a quality I believe essential for games in this genre is quite limited.

A smooth and refined experience that has its limitations, Ocean is great for a burst of calmness but isn’t a spellbinding experience like Sky. Give it a try if you would like to use games as a means to let the stress melt away. 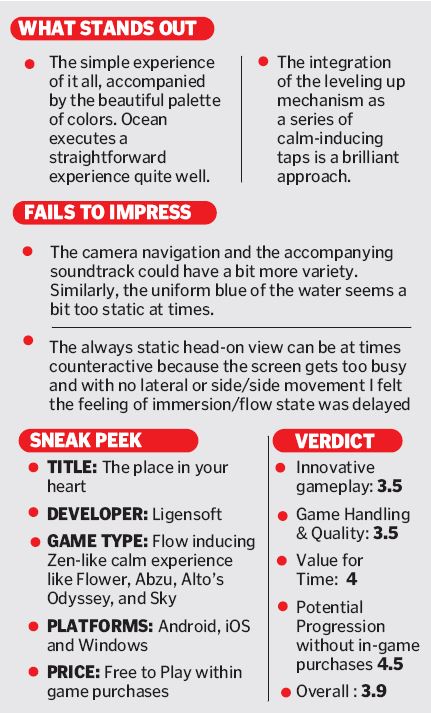