Registraion For First Batch Of ‘Agniveers’ To Begin On June 24 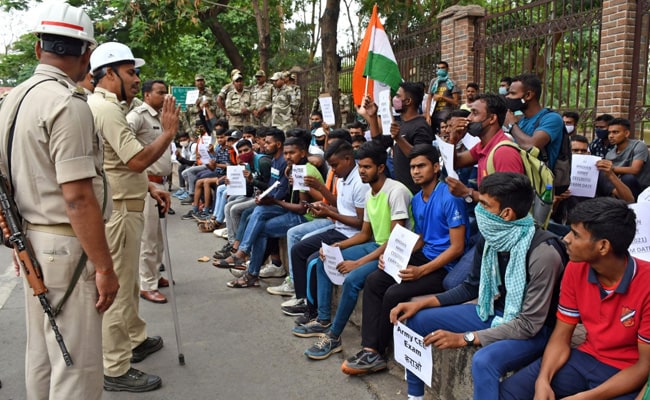 Under the Centre’s new Agnipath recruitment scheme, the registration process for the first batch of Agniveers will begin on June 24 and the online examination would be held on July 24, said a top military official on Sunday.

Addressing a joint press conference of the tri-services, Air Marshal SK Jha said, “Registration process for the first batch of Agniveers will start from June 24. The phase-I online examination process would start on July 24. The first batch would be enrolled by December and training would commence by December 30.”

Navy Chief of Personnel, Vice Admiral Dinesh Tripathi said, “From November 21 this year, the first naval ‘Agniveers’ will start reaching the training establishment INS Chilka, Odisha. Both female and male Agniveers are allowed for this.”

Lt Gen Puri said that the Centre will start with the recruitment of 46,000 Army aspirants to ‘analyse’ the scheme.

He further said, “Our intake of ‘Agniveers’ will go up to 1.25 lakhs in near future and will not remain at 46,000 which is the present figure.”

The Union Cabinet on June 14 approved a recruitment scheme for Indian youth to serve in the three services of the Armed Forces called Agnipath and the youth selected under this scheme will be known as Agniveers.

Under the scheme, people between the age of 17.5 years and 21 years will be inducted into the services for a four-year tenure. During this period, they will be paid a monthly salary between Rs 30,000-40,000 plus allowances, followed by compulsory retirement for most without gratuity and pension benefits.

In a few states, the protests turned violent, which included setting trains on fire and stone-pelting incidents, and arrests were made.

In Uttar Pradesh at least 250 people have been arrested and six FIRs were lodged till Friday. One died in Telangana’s Secunderabad district.

Protesters expressed concerns about their future after four-year of contractual employment in Indian Army, hence, demanded immediate rollback of the scheme.

In response, the Centre has stepped up its efforts to appeal to the protestors not to protest and understand the new recruitment programme of the military. The governmnet explained to the youths that they will get an exit package worth Rs 11.71 lakhs after their tenure and priority in government services.

In a bid to provide supportive measures to the Agniveers after their 4-year service ends in the Armed Forces, Defence Minister Rajnath Singh on Saturday approved a proposal to reserve 10 per cent of the job vacancies in the Ministry of Defence for Agniveers meeting requisite eligibility criteria.

The Union Home Ministry decided to reserve 10 per cent vacancies for recruitment in Central Armed Police Forces (CAPFs) and Assam Rifles for Agniveers. Home Ministry has further announced that it will give three years of age relaxation to Agniveers beyond the prescribed upper age limit to recruitments in CAPFs and Assam Rifles. For the first batch of Agniveers, the age relaxation will be of five years.

Moreover, there are several state governments like Assam, Uttar Pradesh, Madhya Pradesh, Haryana, Arunachal Pradesh, Uttarakhand and Karnataka that have come out and announced various supportive measures for the Agniveers who would return to the civil life after their 4-year service in the Defence Forces.

Several state governments have announced that Agniveers, after serving the armed forces for 4 years, will be given preference in filling of vacancies in state police forces.

Owing to the violence, the train services of the East Coast Railway zone were also affected.

In states like Bihar, where trains were set on fire in some places, the state police are probing the role of the coaching institutes behind the violence.

Acting against the violence, the Andhra Pradesh Police on Saturday detained a man named Subba Rao who ran Army training centres in Palnadu district on the suspicion that he is the conspirator in Thursday’s arson at Secunderabad Railway station in Telangana.