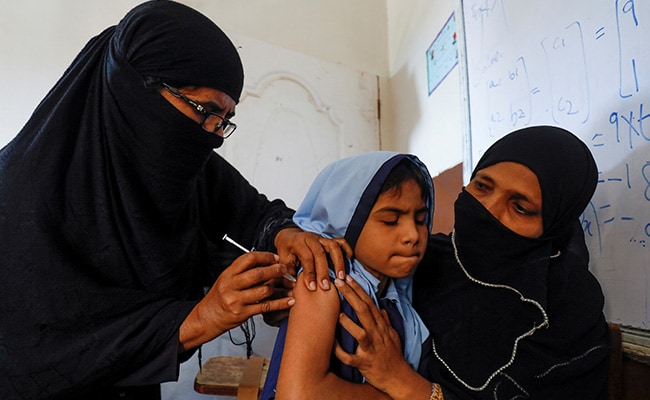 The S. Thyphi genomes only covered a fraction of all typhoid fever cases. (File)

Treatment-resistant typhoid originating mostly from South Asia has springboarded across borders almost 200 times in the past three decades, according to new research that underscores the increasing global threat of infections that can evade antibiotics.

Between 2014 and 2019, scientists sequenced the genomes from 3,489 cases of S. Typhi, the bacteria that causes typhoid fever and kills over 100,000 people annually. Data from four high-burden nations — Bangladesh, India, Nepal, and Pakistan — were combined with an analysis of 4,169 similar samples from more than 70 countries over a 113-year period, making it the largest study of its kind.

The findings, published in The Lancet Microbe, showed that while resistance to first-line treatments generally declined across South Asia, global issues remained. The number of strains able to overpower macrolides and quinolones, two important types of antibiotics, climbed sharply and frequently spread to other countries, the study found.

For years scientists have beaten the drum about rising cases of deadly bugs that can survive treatment with the most potent antibiotics. Drug-resistant diseases killed more people than HIV or malaria in 2019, according to a separate study published in January. Recent examples include rising infections in the US, along with last year’s deadly fungus outbreak in India, where the misuse of antibiotics in humans and animals is exacerbated by poor sanitation.

The findings are “a real cause for concern,” said Jason Andrews, an associate professor at Stanford University and the study’s lead author, urging that prevention measures be put in place, particularly in high-risk nations.

“The fact resistant strains of S. Typhi have spread internationally so many times also underscores the need to view typhoid control, and antibiotic resistance more generally, as a global rather than local problem,” he said.

The study, funded by the Bill & Melinda Gates Foundation, had some limitations, including the underrepresentation of samples from endemic regions such as Sub-Saharan Africa and Oceania. The S. Thyphi genomes only covered a fraction of all typhoid fever cases, meaning the researchers’ estimates probably undershot the true scale of global spread and resistance.