Jangaon: Fed up with less or no-profit with the cultivation of traditional crops, several enthusiastic and enterprising farmers from the district are evincing much interest in taking up the cultivation of the exotic dragon fruit, thanks to the encouragement and financial support of the State government.

One such farmer from Jeedikal village of Lingala Ghanpur mandal is reaping riches with the dragon fruit cultivation. Mylavaram Venkanna, an ideal farmer who is always ready to take risks, had cultivated the dragon fruit in one acre of his lands as the State government offered him a subsidy of Rs five lakhs on pilot basis.

“I spent Rs 1.25 lakh, which was 25 percent of the total input cost, from my pocket and cultivated the dragon fruit in one acre. I got nearly four lakh income on the crop last year,” Venkanna told ‘Telangana Today’. Before cultivating this exotic plant, he visited Vizianagaram and Nellore districts of Andhra Pradesh and the Agriculture University, Rajendranagar to study the cultivation process. Venkanna said farmers can expect yield for 25 to 30 years. The first yield would be after three years. 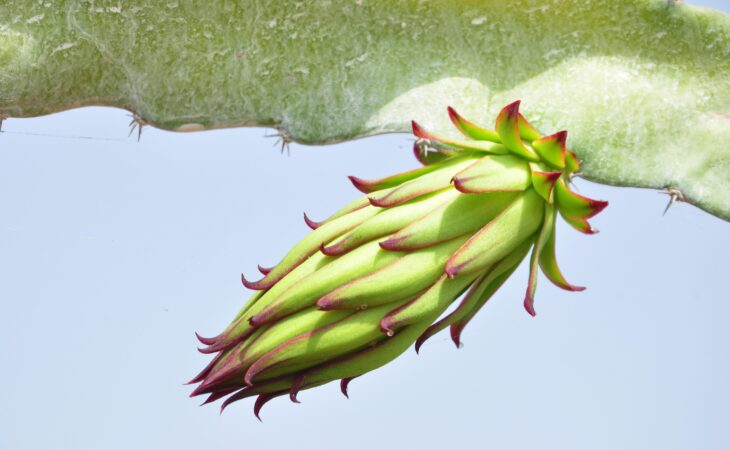 According to the horticulture officials, the flowering and fruiting of dragon fruits coincide with the monsoon season. Its flowers are hermaphrodites (male and female organs in the same flower) in nature and open at night. Nocturnal agents such as bats and hawk moths act as pollinators, and proper pollination ensures the fruit setting, size and total yield. Normally, flowering and fruiting happens in three to five segments from June to November. Fruits are ready to be harvested 30-35 days after flowering.

Each fruit weighs around 200 to 700 grams, depending on management practices. In well-managed orchards, economic fruit yields start after three years and the average yield can be up to 15 tonnes per acre. On an average, the farmer can get Rs eight to nine lakh income per acre at least for 25 years, officials said. Dragon fruit cultivation needs no chemical pesticide or fertilizer.

“All we have to do is use the organic manure of the cattle dung,” Venkanna said. Nearly 2,000 saplings are required for one acre of the land. Four plants can be planted along the concrete poles and the distance between the poles should be eight feet. “I got imported 2028 saplings from Vizianagaram and set up 504 poles with eight feer high. By arranging the drip facility, I am giving irrigation for once in every 15 days,” he said. District Horticulture Officer KR Latha said the dragon fruit is being cultivated in nearly 35 acres in the district. “Dragon fruit requires very little attention for pests and diseases, hence farmers are showing more interest in it,” she said.

The rates of fruits vary from Rs 150 to Rs 200 per kg in the retail markets. Prices in the market are highly variable and mainly depend on fruit size and pulp colour. Officials said dragon fruit is being cultivated across Telangana of late. “Before last year, the subsidy was Rs 3.50 lakh per acre, and the subsidy amount came down to Rs 1.50 lakh acre last year. This year, we are yet to get the sanctions,” the District Horticulture Officer said.

Executive Director of the Bala Vikasa, one of the top NGO for working for the sustainable practices of agriculture including organic farming in South India, Singareddy Shoury Reddy said that the soil and geographical conditions of Telangana are very much conducive for the cultivation of this tropical fruit. He said that there is feasibility for cultivation of dragon fruit in 10,000 acres in Telangana due to the prevailing demand in the market. “Though the investment is high, the profits are also high,” he said, and added that the chips, jam, juice and even wine are made of dragon fruits. “Dragon fruit wine is being made in Hyderabad too,” he said.